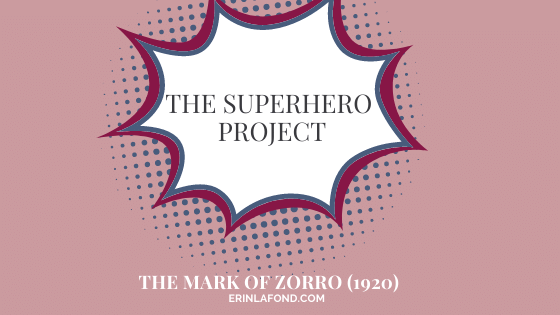 Some of you might be saying, “Erin, you announced this project over a month ago. Why are we just getting our first post now?” Because I spent time watching and researching The Shadow Strikes (1937) only to discover The Mark of Zorro (1920) and, since I’m doing this in chronological order, I had to go back.

The Mark of Zorro is a black and white, silent film starring the dynamic Douglas Fairbanks. It is based on the story “The Curse of Capistrano” by Johnston McCulley which was originally published in “All-Story Weekly,” the same serial that originally published Edgar Rice Burroughs. The movie opens with “Oppression – by its very nature – creates the power that crushes it. A champion arises – a champion of the oppressed – whether it be a Cromwell or someone unrecorded, he will be there. He is born.” which both tells you the movie’s themes and is just an interesting way to start a film. 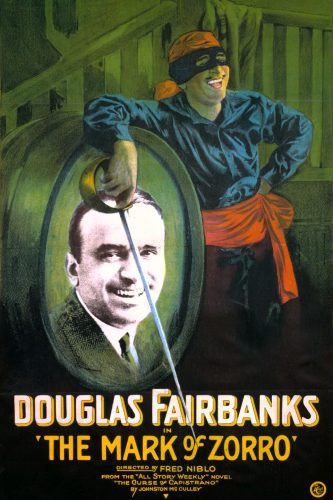 The story revolves around the daring Zorro who, as a masked rider, defends California from the oppression of the evil men who run the state: Sgt. Gonzales, Captain Ramon, and Governor Alvarado. Zorro’s alter ego is Don Diego Vega, a rich noble, who is seemingly weak and foolish. The movie opens with the governor putting a price on the capture of Zorro, and the events of the film primarily involve large groups of soldiers trying to capture him and failing. This is interspersed with scenes that show us how terrible Sgt. Gonzales, Captain Ramon, and the governor are. Don Diego falls in love with the beautiful Lolita Pulido but only manages to woo her as Zorro. Directly after his first scene with her as Don Diego, he immediately blows himself out of the water by coming back as Zorro and telling her she’s more beautiful than roses. The relationship between Lolita and Zorro gets her already destitute family accused of treason, and Zorro has to rescue her from jail. In the end, Zorro gets the nobles and the soldiers on his side, reveals himself to be Don Diego, and forces the governor to abdicate.

I struggled with including Zorro on this list because most people would not see him as a superhero. The swashbuckler tends to get associated more with the adventure genre. However, having now watched the film, I’m glad I included him in this list because you can see his influence on the real early superheroes like The Shadow and Batman. Fairbank’s Zorro influenced Bill Finger when he was creating Batman to the point where Zorro is one of Batman’s heroes. In some versions, Bruce Wayne and his family were attending The Mark of Zorro the night his parents were killed.

This influence is easy to spot. First of all, they both use “useless rich kid” as their alter ego to throw suspicion off of them. There’s a slight disconnect where Bruce is a playboy and Don Diego can only get the girl as Zorro, a trait which connects him more with Superman’s Clark Kent. Zorro also has a hidden stable where he keeps his horse that has secret passageways back up to his house. When I saw it, I literally said: “Oh my god, it’s the Batcave.” Plus, he’s a master at disappearing and escaping his would-be captors. In the beginning, he escapes an entire bar full of soldiers through misdirection. This is directly after he terrifies all of them with a single gun, sword fights with Sgt. Gonzales, and carves a Z into the guy’s underpants. The people within the film that are afraid of him also believe he has powers. At one point a soldier says, “Zorro knows the deeds you do before you think them – takes any shape he wills – appears through keyholes!” Those are some pretty intense powers for a masked rider. This is similar to Batman’s way of seemingly appearing out of thin air. Zorro also has a mute servant named Bernando which reminds me more of the Shadow (which I’ll talk about in my next post) but you could also connect him to Batman’s Alfred. He’s closer to 1960’s Batman in personality because he loves to laugh and mock his opponents which just makes him fun to watch.

The film itself is full of comedy and life which can be mostly attributed to Douglas Fairbanks. At one point, Fairbanks was extremely popular along with his wife, Mary Pickford, and Charlie Chaplin.  He was primarily an athletic and comedic actor before this so the role was perfect for him. Plus, he was able to do his own stunts. We’re not sure who gave him the original story, but Pickford encouraged him to read it. Fairbanks was the one who told his studio to secure the rights and begin pre-production. The film ended up breaking records during its opening weekend and garnering three times its production costs. The film was a hit both domestically and internationally. The reviews were mostly good. The New York Times said: “Certainly there are moments in the motion picture which must delight anyone, no matter how preposterous they are” which is pretty much a perfect way to describe any superhero movie.

The gender politics of this movie aren’t great which isn’t surprising considering the time. You have the classic damsel-in-distress who has to be rescued from Captain Ramon who is also pursuing her. At one point, he tries to sexually assault her, and Zorro has to save her. Zorro’s not too great either. In their first scene together, she slaps him a couple of times, and he just smiles at her. It’s a little creepy. The love story is pretty crucial to the movie though and was part of Fairbanks successful attempt to revitalize his image. It was well-received by critics and audiences, and it’s pretty cute and funny if you ignore the more disturbing bits.

I was surprised at how much I enjoyed this movie. If you’re interested, it’s on the Internet Archive.