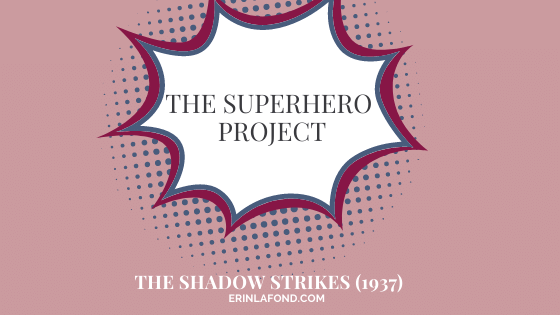 The Shadow Strikes (Lynn Shores, 1937) concerns a man named Lamont Cranston AKA The Shadow. The film is based on a story by Walter B. Gibson (as Maxwell Grant) titled “The Ghost of the Manor.” The Shadow stops a couple of criminals from robbing a safe, waits for the police, and attempts to escape. But he doesn’t get out in time and has to pretend to be the man whose safe was being robbed, a lawyer named Chester Randall. A call comes in asking Chester Randall to come to the Delthern house where a rich client is trying to quickly change his will. The client is murdered through the window, and the murderer escapes. Nearly all of the man’s nephews are suspects, and he also has a beautiful niece who is charmed by the fake Randall. I won’t give away the ending in case you’re interested in watching the film, but it’s quite the trope. 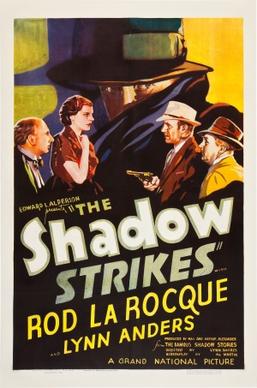 You could call this movie the birth of the superhero genre though it’s not quite fully developed. You could easily describe this movie as a crime film or even a noir film. A man works as a detective and solves a fantastical murder. Still, there are elements that are unique to the superhero genre which is why it’s included on this list even though Cranston probably spends a minute total as The Shadow. Rather than simply solve the murder Sherlock Holmes-style, Lamont Cranston dons the garb of The Shadow to chase crime. In this movie, The Shadow doesn’t have any powers, but he does have a reputation that precedes him. Villains know who he is and fear him. He hides in the shadows and covers his face. Beyond that, he has a manservant-sidekick, Hendricks, who attempts to do his bidding and occasionally fumbles the ball. Eventually, both the villains and the police are after Cranston, and he escapes them both. Sound familiar?

By this point, it shouldn’t come as a surprise that The Shadow inspired Batman. (Though inspired is a generous word. It would probably be more accurate to say Batman’s creator’s copied The Shadow.)  The character was a rich playboy who becomes The Shadow to fight crime. The interesting thing about the Shadow is that he originally started as a voice on a radio program, a narrator for Detective Story Hour. It wasn’t until the character became popular that his owners, Street and Smith, decided to turn him into a written character. They tapped Walter Gibson, a magician and writer with the pen name Maxwell Grant, to flesh out the character and write his stories. The Shadow’s first appearance was in The Shadow Magazine in 1931. His real name was Kent Allard, and he had multiple disguises including Lamont Cranston, an aristocrat. The movie takes after the radio show a bit more which eventually streamlined the character until he was just Lamont Cranston. The show also introduced The Shadow’s ability to turn invisible and “cloud men’s minds.” The Shadow became popular enough to inspire several ripoffs, including the Batman.

It took about a year or so for Batman to get out of The Shadow’s, well, shadow. That’s how influential and important he was. The Batman has long since eclipsed The Shadow, but we shouldn’t forget who inspired who.

The Shadow Strikes is short film, and I recommend watching it. You can find it on the Internet Archive.